To reduce the carbon footprint caused by utility-wide emissions, California’s Renewables Portfolio Standard was established by legislation in 2002. The mandate requires that all electric utilities procure energy generated by renewable resources into their portfolio.

Subsequent amendments to the law have resulted in a number of changes to the RPS. Most notably, the October 2015 passage of SB 350 extends the timeline requirements to 2030, when 50 percent of each utility’s retail sales must come from eligible renewable energy sources.

Meeting the green energy standard
A longtime proponent of renewable energy, IID has established targets through 2020 that meet or are slightly higher than the procurement targets listed above.

Located in a region with abundant sunshine, enviable geothermal capacity, wind and other renewable potential, IID has met or exceeded all RPS requirements to date, procuring renewable energy from diverse sources, including biomass, biowaste, geothermal, hydroelectric, solar and wind.

In its present position, IID expects to meet and exceed compliance period 3 targets*and plans to procure additional resources in anticipation of higher RPS goals in the future.

Meaningful
As a public utility, the way IID meets its customers’ needs is important. In 2015, IID laid the groundwork to exit its coal obligations. Beginning in 2018, IID’s resource portfolio is 100 percent coal free.

Furthermore, recognizing there are many choices and ways to procure renewable energy, the district is proud that all of its renewable energy resources are designated as being in the portfolio content one category – the highest quality of compliance achievement.

To meet the criteria for this distinction, almost all of IID’s renewable energy comes from local resources and the energy is used immediately as it is generated.

Using local resources is meaningful to IID and the people it serves, as this supports jobs and economic development in the service area.

Going forward
As IID looks to the future, it sees its renewable resources evolving. Within the last year, the district has taken steps to reduce its reliance on fossil fuel. At the same time, IID has entered into an agreement with a local geothermal energy producer to add more geothermal resources to its energy portfolio. 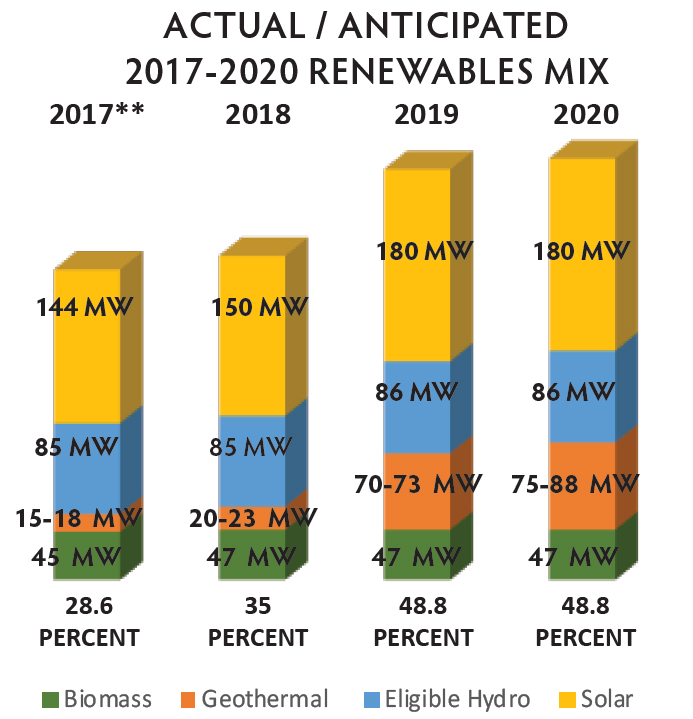 Several factors including the market price of electricity, demand for renewable power, tax credits, transmission capacity and other incentives given to generators will greatly affect the amount and timing of the development of the above noted resources.

According to a 2008 feasibility study sponsored by IID, it will be cost effective for generators to develop as much as 1,969 MW of renewable energy by the year 2016. This is made up primarily of 1,682 MW of geothermal and 216 MW of wind. This growth would bring more than 7,000 new construction and operation/maintenance jobs to the Imperial area. Several factors will influence the realization of this potential including policy and politics of the renewable industry, the market price of electricity, trend/costs of renewable power and most importantly the ability of generators to get their product to market.

In support of IID's goal to become a better steward for resources in its control area, in 2011 IID requested a Geothermal Resource Assessment of its lands in the Imperial Valley. Aerospace Corporation (“Aerospace”) and their subcontractor, Clear Creek Associates, performed a geothermal resource assessment using the following information:

Free viewers are required for some of the attached documents.
They can be downloaded by clicking on the icons below.