We know COVID-19 is creating financial hardship for some of our customers, and we’re committed to making sure they have electricity during this uncertain time. To help, IID will not disconnect electricity to any customers for non-payment, until further notice. Customers who are behind on payment will still owe IID for services provided, however they will not be disconnected during this state of emergency. Please visit our COVID-19 page for more information.

January 1990 marked the inception of construction activities by IID to implement 15 new projects for the IID/MWD Water Transfer. These projects were identified in the landmark December 1988 Water Conservation Agreement between IID and the Metropolitan Water District of Southern California and in the December 1989 Approval Agreement among IID, MWD, Palo Verde Irrigation District and the Coachella Valley Water District. In 2003, IID amended the agreement to align the agreement end date with the Quantification Settlement agreement. In 2007, the agreement was further amended to fix the annual transfer rate to 105,000 AF annually, less Tailwater Return System adjustments. For a list of IID/MWD Water Transfer related agreements, click here. 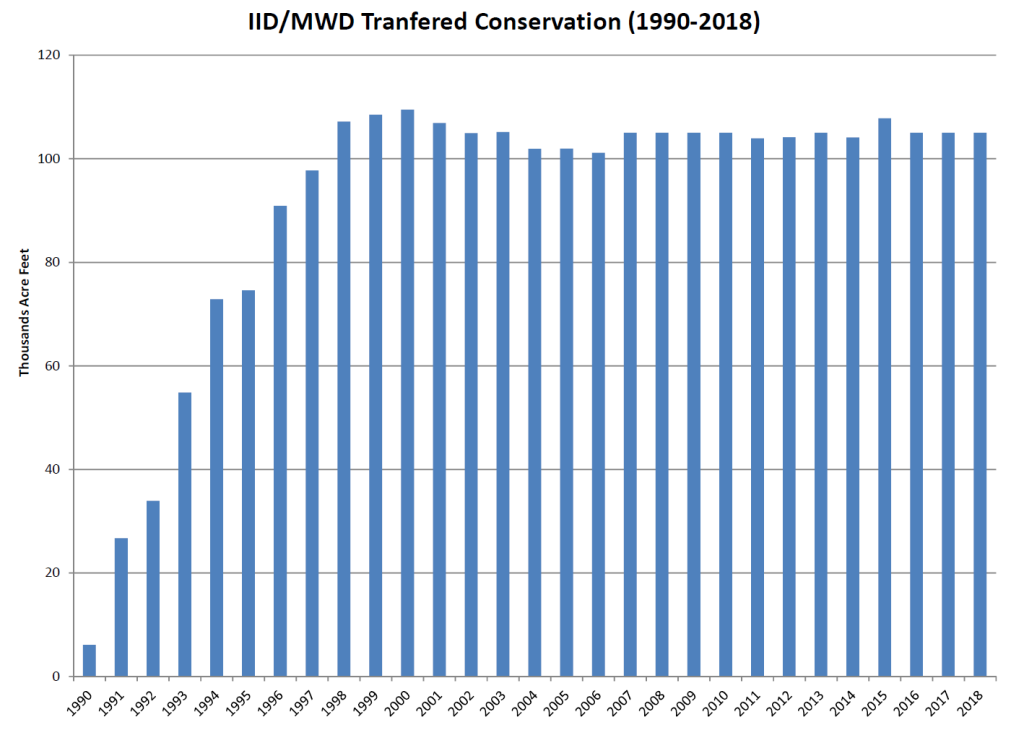 Major construction work was completed in December 1997 and the last project was finalized in September 1998. While the Program focused primarily on modernizing and rehabilitating IID's distribution system, it included on-farm water management projects that permit greater water management flexibility for farmers and opportunities for farmers to apply water more effectively.

Since the implementation of all 15 IID/MWD Conservation Program projects the associated water savings has fluctuated between 97,150 AF to 113,000 AF annually. As of 2015, the Program consists of 14 conservation projects. These projects will provide a fixed volume of 105,000 AF annually beginning in 2016.

The Program’s projects have been in operation and maintenance mode for over 2 decades. Replacement of aging infrastructure (SCADA, Automated Gates, Water Information System (WIS) and concrete lining, etc.) is ongoing. A reservoir sediment removal program is under development which will attempt to, minimize impacts to farming operations, decrease spillage, maintain reservoir and interceptor capacity plus minimize downtime at Program facilities.

The overwhelming popularity and increase use of the 12 Hour run program has driven a review of the project and facilitated changes to the Program’s original mix of projects. In 2015 the Tailwater Return Systems project (Project 18) was terminated in response to the “Letter Agreement for Substitution and Conservation Modifications to the IID/MWD Water Conservation Agreement” dated December 18, 2014. Operation and maintenance costs of the original tailwater recovery systems constructed under this conservation program have been transferred to their respective owners.

Additional questions about the IID/MWD water transfer should be directed to Sylvester Jones at (760) 339-9139 or by email.

Free viewers are required for some of the attached documents.
They can be downloaded by clicking on the icons below.