IID is entitled to 3.1 million acre-feet each year from the Colorado River. Imperial Dam, located north of Yuma, Arizona, serves as a diversion structure for water deliveries throughout southeastern California, Arizona and Mexico. The operations of IID's River Division Office at Imperial Dam, as well as system wide water distribution, all fall under the direction of the United States Bureau of Reclamation. Water diverted at Imperial Dam for use in the Imperial Valley first passes through one of three desilting basins, used to remove silt and clarify the water. Each desilting basin is 540 feet wide by 770 feet long and is equipped with 72 scrapers designed to remove 70,000 tons of silt per day. The silt is returned to the river by means of six sludge return pipes that deposit the silt into the California Sluiceway. From the desilting basins, water is then delivered to the Imperial Valley through the All-American Canal.

Three main canals, East Highline, Central Main and Westside Main, receive water from the 80-mile long All-American Canal and distribute water to smaller lateral canals throughout the Imperial Valley. Farmers receive water in private ditches from the lateral canals to irrigate nearly 500,000 acres of farmland within IID's water service boundaries. Another important component of IID's distribution system are the seven regulating reservoirs and four interceptor reservoirs that have a total storage capacity of more than 4,300 acre-feet of water.

IID serves water through approximately 5,600 delivery gates for irrigation purposes. It operates and maintains more than 1,400 miles of lateral canals, 150 miles of main canals and the 80-mile-long All-American Canal. IID also maintains over 1,450 miles of drainage ditches used to collect surface runoff and subsurface drainage from over 32,000 miles of tile drains underlying nearly 500,000 acres of farmland. Most of these drainage ditches ultimately discharge water into either the Alamo River or New River. 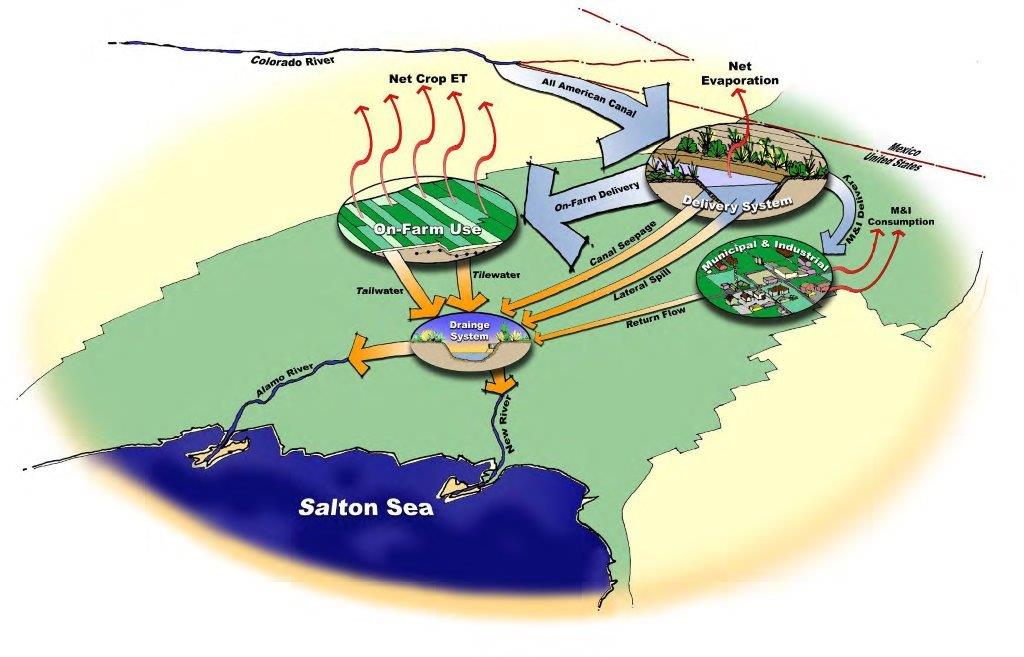