We know COVID-19 is creating financial hardship for some of our customers, and we’re committed to making sure they have electricity during this uncertain time. To help, IID will not disconnect electricity to any customers for non-payment, until further notice. Customers who are behind on payment will still owe IID for services provided, however they will not be disconnected during this state of emergency. Please visit our COVID-19 page for more information. 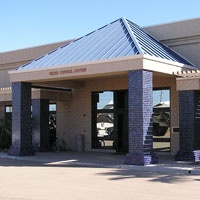 One of the provisions called for in the 1988 water conservation agreement between the IID and the Metropolitan Water District of Southern California was the construction of a modern, automated Water Control Center. This centralized facility has greatly improved control of IID’s water delivery system.

Operation of IID's main canal system has evolved extensively over the years. Initially, the system was controlled manually by field personnel, who routed water on-site by electric powered gates or manual gate lifts. Beginning in the late 1950s, remote-controlled equipment was installed through telephone lines, which provided better control of large sites along main canals. Water delivery equipment for the All-American Canal and the upstream half of Imperial Valley main canals is now controlled from IID Headquarters.

Beginning in the late 1980s, IID began to replace approximately half of the old remote-controlled systems in the field and at the control office with computerized equipment. Telephone communication links to the sites were also replaced with a radio/microwave communication network. This type of radio communication network provides automated operation of field sites along with monitoring and control capabilities directly from the control room. In 1988, IID's first automated site was completed along with the construction of the Carter Reservoir. Since then, the Water Control Center (Water Dispatching) has electronically controlled all main canal water.

After almost one year of construction, the new $3 million Water Control Center became fully operational in September of 1993. The 10,000 square-foot building constructed at IID Headquarters now houses all the hardware and software used to regulate automated gates for water delivery as well as collect information needed to verify water savings. In addition, the building is equipped with a backup generator that ensures uninterrupted power service to the control system. Prefabricated electrical control equipment, in cargo containers at each control site, is solar powered or equipped with generators.

The command center provides a controlled environment for water dispatchers, engineers and operation personnel. The center is equipped with a visitor's lobby where guests can observe water control operations through a large window. On display are IID artifacts from the '30s, '40s and '50s that include the very first system automation equipment. The center also houses a large conference room, small kitchen and several administrative offices.